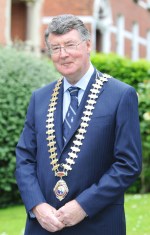 William (Bill) Grimson, a native of Dublin, received his secondary education at The King’s Hospital School and subsequently graduated with an honours degree in Electronic Engineering from Trinity College Dublin in 1970. After graduating Bill gained admission to the Department of Electrical & Computer Engineering at the University of Toronto where he obtained a masters degree taking courses in electromagnetic theory as well as researching the behaviour of antennas in the ionosphere.

Bill then worked for three years as a research and development engineer in Ferranti Ltd., Edinburgh, in their Laser Systems Group, working on electro-optic laser receivers. He then returned to Ireland to take up a position as a lecturer in what was to become DIT, Kevin Street, where in time he became Head of the Department of Control Systems Engineering.

Bill’s lecturing duties were focussed primarily in the areas of digital signal processing, image processing, as well as field and circuit theory. His research activities were centred mostly on the application of engineering paradigms to health informatics and he participated in a number of major European projects. Towards the end of his career in DIT he was attached to the Directorate of Academic Affairs heading a special unit charged with changing the academic programme delivery model to one that was both semesterised and modularised. Nearing the end of his career Bill chose to remain in Academic Affairs where for a time he was Academic Registrar before retiring in 2012.

Bill is a past Chair of the Membership and Qualification Board of Engineers Ireland and was also a member of the Board of Examiners. He currently chairs the CPD committee, is a member of Council and the Executive of Engineers Ireland. He served two terms as the Irish representative on the European Membership Monitoring Committee of FEANI (Fédération Européenne d'Associations Nationales d'Ingénieurs.

Bill has published over 80 journal papers, reports and book chapters in the area of Health Informatics and Engineering Education. He is the Chair of the Health Informatics Standards Consultative Committee of the National Standards Authority of Ireland (NSAI). He acted as sponsor for the working group, comprising members of the Biomedical Engineering Division of Engineers Ireland, which developed ‘A Proposal for a Protocol for Professional Formation and Development of Clinical Engineers in Ireland’ and subsequently brought the proposal to the International Federation for Medical and Biological Engineering (IFMBE) where it was substantially adopted.

In recent times Bill has collaborated with both engineers and non-engineers in Europe and North America reflecting on the education of engineering undergraduates and the subsequent development of the professional engineer: he has authored and co-authored a number of book chapters and articles in the field. In addition, Bill contributed to a book, ‘Understanding the Global Energy Crisis’, edited and written by colleagues in DIT and Purdue University and which sets out the nature of the crisis, and examines the technical and policy options facing the development of major conventional and renewable energy sources.

Finally, Bill is a Chartered Engineer and Fellow of Engineers Ireland who, whilst recognising the grand challenges identified by engineering academies across the globe also recognises the need for engineers to work with society to address those challenges .