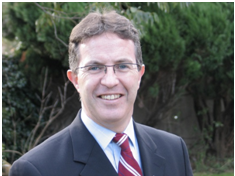 Rory qualified as a teacher of Mathematics and Geography from UCD in 1985.  He joined the staff of the City of Dublin VEC in 1986 as a teacher of Mathematics and Computing in Whitehall College.  He moved to Coláiste Íde College of Further Education in 1991 as an Assistant Principal (Admissions Officer) before being appointed as Deputy Principal in Ballsbridge College of Further Education in 1995.  While in Ballsbridge College he was awarded a Master of Education degree in Educational Management in 1996 from UCD.  In 2001 Rory became Principal of Killester College of Further Education.  Rory has a great interest in inclusive education and has been involved in several international projects since 2001.  In 2011 Killester College became the first educational institute in Ireland to achieve the ‘Excellence through Accessibility’ award from the NDA.  As part of a European project involving 28 countries, he was invited to speak at the European Parliament in May 2013 on the work being done in Killester College on inclusive further education.  He was a member of the FETAC Council from 2006 until 2012 and of the National Council for Special Education from 2007 until 2010.  He is currently a member of the QQI Appeals Panel.  Rory has continued his studies and is currently researching for his PhD in further education policy in Ireland in Trinity College Dublin.